JULY 12, 10:20pm: The signing is official, according to a team press release. 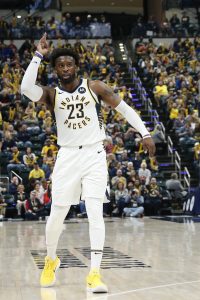 Matthews, 32, spent most of the last four years in Dallas, but was traded to the Knicks this past winter and was subsequently bought out. He finished the season in Indiana, averaging 10.9 PPG with a .369 3PT% in 23 games (all starts) for the Pacers down the stretch.

Joining the Bucks will represent a homecoming for Matthews, who attended high school in Madison, Wisconsin and played his college ball at Marquette.

According to Wojnarowski, the veteran free agent drew interest from a handful of contenders – ESPN’s Tim MacMahon (Twitter link) names the Rockets as one – but he’ll become part of a Milwaukee squad that was just two wins away from the NBA Finals this spring.

Although the Bucks lost Malcolm Brogdon to the Pacers early in free agency, they’ll acquire draft picks from Indiana by signing-and-trading Brogdon, and they’ve otherwise enjoyed plenty of success on the free agent market. Milwaukee is bringing back Khris Middleton, Brook Lopez, and George Hill, and will add Robin Lopez with its room exception.