Hoops Rumors is breaking down the 2019 offseason for all 30 NBA teams, revisiting the summer’s free agent signings, trades, draft picks, departures, and more. We’ll evaluate each team’s moves from the last several months and look ahead to what the 2019/20 season holds for all 30 franchises. Today, we’re focusing on the New York Knicks.

As the Knicks and their fans endured a forgettable 17-65 season in 2018/19, optimism persisted that better days were around the corner.

Rumors that free agents like Kevin Durant and Kyrie Irving were strongly considering a move to New York swirled all season long, especially after the Knicks traded Kristaps Porzingis to Dallas to create a second maximum-salary slot.

While the Porzingis blockbuster was criticized by a wide swath of Knicks fans, most of those fans were at least cautiously hopeful that the deal signaled how confident the front office was in landing two stars in free agency. That belief became even more prevalent after team owner James Dolan offered the following assessment in March: “From what we’ve heard, we’re going to have a very successful offseason.”

You know by now how things actually played out. The Knicks weren’t seriously considered by any of the very best free agents on the market, and just hours into free agency – after missing out on its top targets – the organization put out a public statement to address fans’ disappointment, re-wording and re-issuing that statement moments later to insert a mention of the team’s “core of young players” in its rebuilding plans.

Rather than landing a pair of stars to jumpstart their ascent to contention, the Knicks ended up signing a series of veteran role players to short-term contracts. Those players will likely help the franchise win more games in 2019/20, but New York’s coaching staff will have to walk a fine line in balancing playing time for its incoming veterans with minutes for that “core of young players” the club is still determined to develop.

The short-term contracts those veteran free agents signed will allow New York to retain salary cap flexibility for the next two summers. But there’s no reason at this point to expect the Knicks to have any more success recruiting stars in 2020 or 2021 than they did this summer. There’s still plenty of work to be done to rehab the unflattering reputation the franchise has earned in recent years.

After striking out on their top targets on the open market, the Knicks could have retained some of their own veteran free agents, but opted to let virtually all of them walk. Among those players, DeAndre Jordan, Emmanuel Mudiay, Noah Vonleh, and Mario Hezonja were perhaps the most notable.

Jordan was supposed to help recruit Durant and Irving to the Knicks, but joined the duo across town in Brooklyn instead. As for Mudiay, Vonleh, and Hezonja, it seems as though they and/or the Knicks had little interest in new deals  — none of them signed for more than $2MM with their new teams, so it’s not as if New York couldn’t have afforded them.

Although the Knicks lost some veteran leadership in the frontcourt when they waived Lance Thomas, he was no longer an effective on-court performer by the end of last season. Luke Kornet, a seven-footer who made 36.0% of his three-point attempts in two seasons with New York, is also gone. 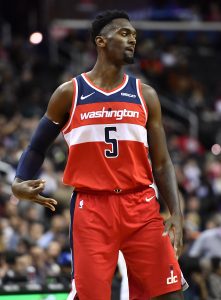 With plenty of cap room available and no stars to use it on, the Knicks committed over $40MM of their 2019/20 team salary to Julius Randle, Bobby Portis, and Elfrid Payton. While New York had to spend its money somehow in order to reach the salary floor, it was a little surprising to see the club invest so heavily in this group of players rather than using its cap flexibility to accommodate salary dumps.

As we saw in trades that sent Andre Iguodala to Memphis, Maurice Harkless to the Clippers, and Allen Crabbe to Atlanta, teams around the NBA were willing to attach first-round picks to unwanted contracts this summer.

Taking on one or two of those unwanted contracts could have helped the Knicks stockpile future assets. It also could’ve helped create more opportunities to get their young prospects consistent playing time while not necessarily compromising their ability to acquire veteran talent — Iguodala, Harkless, and Crabbe all figure to play rotation minutes this year.

Instead, the Knicks will move forward with players like Randle, Portis, and Payton, who have put up big per-game numbers for lottery teams throughout their respective careers. Of the three, only Portis has ever appeared in the postseason, having played a bench role for a 2016/17 Bulls team that was eliminated in the first round.

Incoming veteran free agents Taj Gibson and Wayne Ellington have better records of success, but they’re no more than role players at this point in their respective careers (Gibson is 34 years old, while Ellington will turn 32 in November). Reggie Bullock would have been a solid addition to the rotation, but he’s not healthy, having undergone cervical disc surgery in July. It remains to be seen when he’ll make his Knicks debut.

The Knicks’ best free agent addition of the summer might have been Marcus Morris, whom the team snatched away from the Spurs after he had already reached a tentative agreement to sign with San Antonio. But that signing came after New York had already signed Randle, Portis, and Gibson, three players who essentially play the same position as Morris. Perhaps Morris can slide down to small forward, though it’s hard to imagine many effective lineups that feature more than two of those players.

While New York’s approach in free agency may have been questionable, the team’s most important acquisition happened in June. RJ Barrett, the No. 3 overall pick in the 2019 draft, figures to play a more crucial role on the Knicks’ next playoff team than any free agents signed this summer. Fans were disappointed not to land the No. 1 overall pick and Zion Williamson, but Barrett’s star potential shouldn’t be understated — he could eventually develop into one of the NBA’s best perimeter scorers.

Once it became clear that the Knicks weren’t going to sign Durant, Irving, or other star free agents, it was always going to be an uphill battle for the franchise to “win” the offseason. It’s at least a step in the right direction that the front office didn’t make any misguided long-term commitments to lesser options, a la Joakim Noah in 2016.

Still, while this stopgap Knicks team should win more than 17 games, it doesn’t look like a serious playoff threat, even in the league’s lesser conference. The club’s primary goals should be getting good value for its veteran trade chips before February’s deadline and making sure that young players like Barrett, Kevin Knox, and Dennis Smith Jr. get plenty of opportunities to play and improve over the course of the season.