When a star player like Zion Williamson enters the NBA, his new team – in this case, the Pelicans – can rest assured that there will be little to no chance of him holding out for a larger contract. That’s because a first-round NBA draft pick is only eligible to sign a rookie scale contract, which limits his leverage and ensures that his draft slot will dictate how much he gets paid. 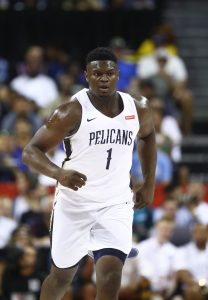 A rookie scale contract for first-rounders is always for two guaranteed seasons, with team options for the third and fourth seasons of the deal. The scale amount is strictly set by draft position for the first three years of the contract, with the amount of the fourth year determined by a percentage raise on the third-year salary, as RealGM’s rookie scale chart for 2019 picks shows.

Players are eligible to sign for as little as 80% or as much as 120% of the scale amount, though almost every player signs for the full 120%. Cavaliers first-round pick Kevin Porter Jr. became the first player in several years to sign for just 80% of his rookie scale amount this year, and even that rate only applies to his rookie season — he’ll get the full 120% in years two through four.

Under the NBA’s current Collective Bargaining Agreement, the rookie scale will eventually increase annually at the same rate as the salary cap. In that scenario, a 5% salary cap increase would mean a 5% increase to rookie scale salaries.

However, the league has been gradually phasing in a 45% overall increase to rookie salaries over the last three seasons (15% per year), complicating that formula. For instance, while the cap only increased by about 7.1% from 2018/19 to 2019/20, the rookie scale amounts for each pick increased by approximately 19.5%.

The scale amounts and fourth- and fifth-year raises vary depending on draft position. Top picks earn the highest salaries, while late first-round picks get the most substantial bumps at the end of their contracts. For instance, the 30th overall pick gets an 80.5% raise between years three and four, with a qualifying offer increase of 50%.

An earlier version of this post was published in 2012. Photo courtesy of USA Today Sports Images.