4:27pm: Brown’s new deal has $103MM in guaranteed money, with $4MM in likely incentives and another $8MM in unlikely incentives, a source tells Jay King of The Athletic (Twitter link).

3:59pm: The Celtics have officially announced Brown’s extension, issuing a press release to confirm the deal. 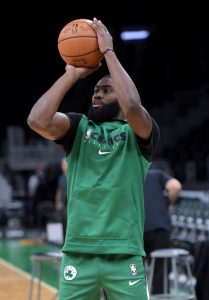 “Jaylen has made tremendous strides over the last three years and has become a fantastic player for us on both ends of the court,” Ainge said in a statement. “He’s a great person and hard worker who, at 22 years old, can score and defend against the best players in the NBA. Jaylen is a true professional who did a great job accepting his role last season, and he is a major part of our championship goals.”

Given Brown’s down year and the Celtics’ history of letting extension-eligible players reach restricted free agency, it initially looked as if the two sides were unlikely to work out a new deal this fall. However, Brown – who operated without an agent for his first three years in the NBA – recently hired Glushon to negotiate his extension, and his new agent came through, getting a deal done with just a few hours left before tonight’s deadline.

According to Wojnarowski (via Twitter), Glushon and Celtics president of basketball operations Danny Ainge completed the majority of their negotiations over the weekend. This is Ainge’s first rookie scale extension for a Celtic since Rajon Rondo in 2009, Woj adds.

While it’s possible that Brown could’ve done a little better in restricted free agency next summer, there isn’t a massive difference between his new deal and a maximum-salary offer sheet. Based on the NBA’s latest projections, a four-year offer sheet from a rival suitor would have been worth $124.7MM. And if the cap for 2020/21 comes in any lower than $116MM, that projected max would drop along with it.

Boston will now count on continued improvements from Brown, who should take on a greater role in 2019/20 now that veterans like Kyrie Irving, Al Horford, and Marcus Morris are no longer on the roster. Brown is coming off a strong showing for Team USA in the 2019 FIBA World Cup, and is viewed as a potential impact player at both ends of the court.