DECEMBER 25: The Jazz have officially signed Tucker, according to NBA.com’s transactions log, which suggests that the move was finalized on Tuesday. In addition to having a guaranteed contract for 2019/20, Tucker will have a partially guaranteed salary for next season, per Tony Jones of The Athletic.

DECEMBER 24: The Jazz have officially waived Green, the team announced today in a press release. 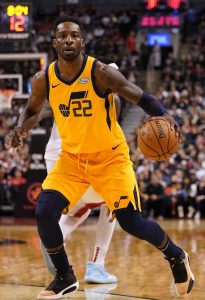 DECEMBER 23: The Jazz have decided to waive forward Jeff Green, Tony Jones and Shams Charania of The Athletic report.

Utah needed to open up a roster spot because the team is signing small forward Rayjon Tucker to a multi-year contract, per Adrian Wojnarowski of ESPN.

Tucker, who went undrafted out of Arkansas-Little Rock, made a strong impression at the G League Showcase, having been identified by John Hollinger as the NBAGL player most deserving of a call-up. He had been playing for the Bucks’ affiliate, the Wisconsin Herd. His contract will be guaranteed for the remainder of this season, according to Wojnarowski.

In 16 G League games this season, Tucker was averaging 23.8 PPG, 4.6 RPG and 2.8 APG in 33.8 MPG. The Jazz only have the prorated minimum exception available to sign Tucker, Bobby Marks of ESPN tweets.

Green was averaging 7.8 PPG and 2.8 RPG in 28 games with Utah. He scored seven points in 18 minutes against Miami on Monday. He was making the veteran’s minimum at $2.56MM.

Green, 33, was playing for eighth NBA team. He started 44 games for Washington last season. His scoring average with the Jazz was the lowest of his career.

It’s unusual for a team to cut a rotation player, particularly right after a game. But the Jazz obviously valued the 6’5” Tucker and had competition for his services.

The Jazz were busy throughout the night. They also agreed to acquire guard Jordan Clarkson from the Cavaliers.