While relying on ESPN.com’s Trade Machine may be the simplest way for NBA fans to verify whether or not a trade will work under league rules, it’s worth examining the primary tool in the NBA’s Collective Bargaining Agreement that determines a trade’s viability — the traded player exception.

Let’s look into each scenario in greater detail….

In a simultaneous trade, different rules applies to taxpaying and non-taxpaying clubs. A non-taxpaying team can trade one or more players and take back….

Here’s a recent example of these rules in effect: 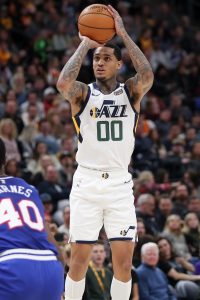 For taxpaying teams, the traded player exception rules for a simultaneous trade are simpler, albeit more restrictive. A taxpaying club can send out one or more players and take back 125% of the outgoing salary, plus $100K. If the Trail Blazers were to trade Hassan Whiteside‘s $27,093,018 expiring contract, for instance, they could take back up to $33,966,272.

In non-simultaneous deals, a team can trade away a single player without immediately taking salary back in return. The team then has up to one year in which it can acquire one or more players whose combined salaries amount to no more than the traded player’s salary (plus $100K).

Interestingly, the same Cavaliers/Jazz trade we cited above as an example of a simultaneous trade was actually viewed as a non-simultaneous trade from Cleveland’s perspective, with Clarkson and his $13,437,500 salary as the outgoing piece. Exum’s $9,600,000 salary was immediately absorbed using that trade exception, leaving the Cavs with an exception worth $3,837,500.

Putting the two together:

When evaluating an NBA trade, it’s worth remembering that the two teams can view the deal entirely differently. For example, one team could consider a trade simultaneous, while the other team breaks the transaction down into two separate trades, one simultaneous and one non-simultaneous.

Let’s take a look at a recent real-life example, examining the trade that saw the Trail Blazers deal Kent Bazemore and Anthony Tolliver to the Kings in exchange for Trevor Ariza, Caleb Swanigan, and Wenyen Gabriel.

From the Trail Blazers‘ perspective, the trade broke down as follows:

Here’s how it looked from the Kings‘ perspective:

The traded player exception is one of the CBA’s more complicated tools and can make it challenging for over-the-cap teams to navigate the trade market. It’s undoubtedly simpler to use ESPN’s Trade Machine to determine whether a deal is legal, but examining the rules and figuring out exactly how a blockbuster trade breaks down can provide rewarding insight into an NBA club’s management of its cap.

Earlier versions of this post were published in 2012 and 2018 by Luke Adams.