Every week, Hoops Rumors takes a closer look at players who will be free agents or could become free agents next offseason. We examine if their stock is rising or falling due to performance and other factors. This week, we take a look at players from the Northwest Division: 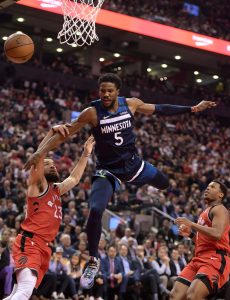 Malik Beasley, Timberwolves, 23, SG (Up) – Signed to a four-year, $7.8MM deal in 2016
Beasley turned down an extension offer with the Nuggets last offseason, which looked like a really bad decision when he struggled to get steady playing time on Denver’s deep bench. Freedom came in the form of a trade with the Timberwolves and Beasley quickly seized the opportunity. He averaged 22.0 PPG, 6.7 RPG and 3.0 APG in his first three games with his new team. Of course, Minnesota made an even bigger deadline deal. The chemistry that Beasley forms with backourt partner D’Angelo Russell will determine how much Minnesota would be willing to fork up to re-sign the restricted free agent.

Jordan McRae, Nuggets, 28, SG (Up) – Signed to a one-year, $1.65MM deal in 2019
The Nuggets made a series of minor moves prior to the trade deadline. In the short run, the most significant was the acquisition of McRae, who was quietly enjoying a career year with the Wizards. McRae, who also had stints with Cleveland and Phoenix during his NBA career, was averaging 12.8 PPG, 3.6 RPG and 2.8 APG in 22.8 MPG with Washington. Stats with bad teams can be shrugged off but McRae, who missed some games with hand and ankle injuries, has a chance to show that he can be a second-unit factor for a quality team. The Nuggets possess his Early Bird rights, which increases the possibility of re-signing him if they like what they see.

Andre Roberson, Thunder, 28, SF (Down) – Signed to a three-year, $30MM deal in 2017
It’s sad that Roberson hasn’t been able to resurrect his career after suffering a serious knee injury at Detroit’s Little Caesars Arena in January 2018. There have been many stops and starts during the rehab process since he ruptured his left patella tendon but Roberson has never been able to reach the point where he could play again. Oklahoma City was unable to move his expiring contract before the trade deadline. The last update on Roberson was that he was continuing his rehab in Los Angeles but there’s a strong possibility that the one-time lockdown defender has played his last NBA game.

Emmanuel Mudiay, Jazz, 23, PG (Down) – Signed to one-year, $1.74MM deal in 2019
Mudiay, the seventh overall pick of the 2015 draft, was signed as a backup to Mike Conley and was playing around 20 MPG until Conley returned from his latest injury. Mudiay hasn’t seen the floor for more than 15 minutes since mid-January and that’s not going to change when Conley suits up. Mudiay posted a career year statistically with the woeful Knicks last season but they didn’t make him a qualifying offer, which thrust him into unrestricted free agency. He can stick around the league for awhile if he’s willing to accept short-term, minimum-salary deals.

Mario Hezonja, Trail Blazers, 24, SF (Down) – Signed to a two-year, $3.66MM deal in 2019
Hezonja was hoping last summer that the Knicks would re-sign him. The call never came and Hezonja, who started 24 games with New York last season, wound up signing a two-year, minimum-salary contract with Portland. Hezonja, who is currently nursing an ankle injury, was playing regularly but not effectively before the team signed Carmelo Anthony. When he’s gotten opportunities to shoot it, he hasn’t been able to knock them down (38.5% overall, 28.4% from distance). Hezonja holds a $1.978MM player option on his contract for next season and it will be interesting to see if he opts in or chooses to see if another franchise will give him a chance to play regularly.