Reggie Jackson Bought Out By Pistons, Plans To Join Clippers

5:07pm: The Pistons have issued a press release formally announcing they’ve reached a buyout agreement with Jackson and have waived him. 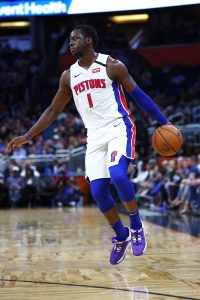 3:24pm: Veteran point guard Reggie Jackson has reached a buyout agreement with the Pistons, according to ESPN’s Adrian Wojnarowski, who reports (via Twitter) that Jackson intends to sign with the Clippers once he clears waivers and reaches free agency.

Jackson, 29, has spent the last five years in Detroit, having been acquired from the Thunder in a three-team trade in February 2015. He signed a five-year, $80MM deal with the Pistons a few months later and is now in the final season of that contract. His buyout agreement with the club figures to slightly reduce his $18,086,956 cap hit for 2019/20.

The Pistons had hoped that giving Jackson the reins as the team’s starting point guard – after he began his career as Russell Westbrook‘s backup – would clear a path for him to develop into a star. Although the former Boston College standout had some productive seasons in Detroit, his overall numbers as a Piston (16.2 PPG, 5.6 APG, .425/.354/.851 shooting) fell short of that star level.

Jackson’s name surfaced frequently in trade rumors over the last couple years, but his rising cap hit made it difficult for the Pistons to find a deal that upgraded their roster. Even at this year’s deadline, as the team pivoted toward a rebuild and accepted a very modest package for Andre Drummond, Detroit apparently didn’t find a trade offer it liked for Jackson.

With the Pistons headed for a lottery finish, there was little incentive to keep Jackson around for the rest of the season. He’ll now finish the year with the Clippers, who have until this Saturday to sign a player and get back to the 14-player roster minimum.

As Ohm Youngmisuk of ESPN notes (via Twitter), L.A. could still use a defensive wing or a rim protector, but Jackson will give the team another ball-handler and a veteran scorer off the bench.

The Lakers and Clippers, who were poised to compete for Darren Collison if he had opted to come out of retirement, were each said to be in the market for a point guard. Wojnarowski confirms (via Twitter) that the Lakers also had interest in Jackson — they’ll have to look elsewhere if they still hope to address the position.

Jackson had still been owed $5.7MM of his ’19/20 salary, tweets ESPN’s Bobby Marks. While we don’t know the exact terms of the buyout agreement, the veteran guard likely agreed to give back a prorated portion of the minimum salary. If he’s officially released by the Pistons today and joins the Clippers on Thursday, he’d make $734,025 on his new contract, with a $512,721 cap charge.

34 thoughts on “Reggie Jackson Bought Out By Pistons, Plans To Join Clippers”