NOVEMBER 25: The Hawks have officially signed Hill, per a team press release. The deal is non-guaranteed, tweets Chris Kirschner of The Athletic.

“Solomon is a player who has been on four playoff teams and has competed on the highest level,” president of basketball operations Travis Schlenk said in a statement. “We are fortunate to add his veteran presence to our group.” 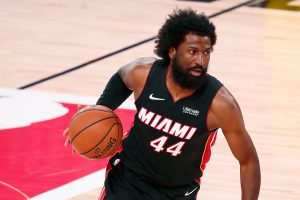 NOVEMBER 23: The Hawks and free agent forward Solomon Hill have reached an agreement on a one-year deal, according to ESPN’s Adrian Wojnarowsi (Twitter link).

Hill, 29, was very briefly a member of the Hawks last summer when the team acquired him from New Orleans in a draft-night trade, but Atlanta flipped him to the Grizzlies in a subsequent deal. After appearing in 48 games for Memphis, Hill was once again traded at the 2020 deadline and finished the season with the Heat, appearing in a total of 18 regular season and playoff games for Miami.

The Hawks have made it a priority this offseason to add some solid defenders to their roster, having already struck deals with Kris Dunn and Rajon Rondo. The team is also signing Danilo Gallinari and is waiting to see if Sacramento will match its offer sheet for Bogdan Bogdanovic.

With Hill coming aboard, the Hawks project to have at least 15 players on guaranteed contracts if the Kings decline to match on Bogdanovic, according to Chris Kirschner of The Athletic, who notes (via Twitter) that second-round pick Skylar Mays could end up on a two-way deal if there’s no room on the standard roster for him.