NOVEMBER 25: The Kings have officially locked up Fox to his new five-year extension, per the NBA’s transactions log. He’ll earn just over $8MM in 2020/21 before his new deal begins in ’21/22. 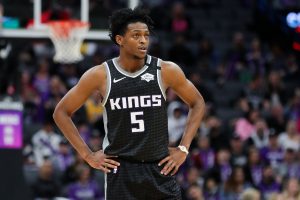 NOVEMBER 20: The Kings and De’Aaron Fox have agreed to a five-year, maximum-salary contract extension, reports Shams Charania of The Athletic (via Twitter). The new deal will go into effect starting in 2021/22, with Fox playing out the final year of his rookie contract in ’20/21.

According to Charania, the deal will start at 25% of the cap unless Fox meets certain Rose Rule criteria, in which case it could be worth up to 30% of the cap. ESPN’s Bobby Marks (Twitter link) reports that the Rose Rule terms in Fox’s new deal call for a starting salary of 26% of the cap if he makes the All-NBA Third Team, 28% for All-NBA Second Team, and 30% for All-NBA First team.

The exact value of Fox’s new contract will depend on where the 2021/22 cap lands. If it increases by 3% over this year’s figure, which is currently the expectation, Fox would earn $163MM over five years on the standard max, or up to $195.6MM if he meets his Rose Rule criteria.

For the Kings, it’s a massive investment in their cornerstone player, who averaged a career-best 21.1 PPG to go along with 6.8 APG, 3.8 RPG, and 1.5 SPG in 51 games (32.0 MPG) last season. While it will be interesting to see how lottery pick Tyrese Haliburton fits alongside Fox, Sacramento is making it clear with this move that the Haliburton pick has no impact at all on Fox’s long-term future with the franchise.

The Kings will now have three players earning more than $20MM annually beginning in 2021/22, though Harrison Barnes‘ and Buddy Hield‘s futures in Sacramento are far less certain than Fox’s.

Fox is one of a handful of players eligible for a rookie scale extension this offseason who is expected to receive the max. Jayson Tatum and Donovan Mitchell are also in line for maximum-salary deals.