DECEMBER 1: The Mavericks have made it official, formally announcing that they’ve re-signed Cauley-Stein. 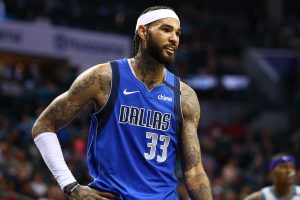 NOVEMBER 22: The Mavericks have agreed to bring back veteran center Willie Cauley-Stein, according to Shams Charania of The Athletic, who reports (via Twitter) that Cauley-Stein will sign a two-year contract worth $8.2MM. This signing would most likely be achieved via Dallas’s mid-level exception.

Charania adds (via Twitter) that there will be a second-year team option on Cauley-Stein’s contract, and notes that Dallas pivoted to a new deal with the big man after falling out of the mix for Marc Gasol.

Sources tell Brad Townsend of the Dallas Morning News (Twitter link) that the Mavericks are “most likely done” with their offseason dealmaking, but caution that “in this crazy environment you never know.” The club’s biggest new offseason addition is swingman Josh Richardson, brought in via a trade with the Sixers for Seth Curry that also yielded the rights to rookie guard Tyler Bey.

Cauley-Stein, 27, played 13 games for the Mavericks last season, averaging 5.2 PPG, 4.6 RPG, and 0.8 BPG in 12.1 MPG. Dallas traded for the 7′ center after starter Dwight Powell went down with an Achilles tear in January. Power forward/centers Kristaps Porzingis and Maxi Kleber will be ahead of Cauley-Stein in the center rotation.