NOVEMBER 25: The Raptors have officially signed Baynes, according to the NBA’s transactions log. Michael Grange of Sportsnet.ca has reported that the second year of the big man’s deal will technically be non-guaranteed rather than a team option.

NOVEMBER 22: Having lost Marc Gasol to the Lakers and Serge Ibaka in a signing with the Clippers, the Raptors have moved quickly to reach an agreement to sign free agent center Aron Baynes to a two-year, $14.3MM contract, reports Shams Charania of The Athletic (Twitter link). 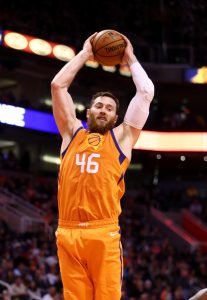 The second year of Baynes’s contract will be a team option, allowing the Raptors to preserve their 2021 cap flexibility, tweets Bobby Marks of ESPN. Toronto will use a chunk of its mid-level exception to complete the signing.

Though the 33-year-old Baynes may lack the passing acumen or career accolades of the 35-year-old Gasol or the defense of the 31-year-old Ibaka, Baynes is more mobile than the former and has developed into a solid outside shooting threat in his own right. During his 2019/20 season with the Suns, Baynes connected on 35.1% of his 4.3 three-pointers per game, significant career highs as he took pains to modernize his game.

During his lone season in Phoenix, the 6’10” Baynes also set new career-best benchmarks in points and assistants, averaging 11.5 PPG and 1.6 APG in a career-most 22.2 MPG. He also averaged a solid 5.6 RPG. Baynes began his career with the Spurs, with whom he won a title as a deep bench contributor in 2014. He also had two-year stops with the Pistons and Celtics.

Baynes looks to slot in as the Raptors’ starting center, replacing Gasol. In a separate deal today, Toronto is also set to re-sign center/power forward Chris Boucher, who emerged as a consistent rotation option behind Gasol and Ibaka. Boucher may now become Baynes’s primary backup as he continues to develop.

Alex Kirschenbaum contributed to this report.