NOVEMBER 24: The Spurs have officially re-signed Poeltl, the team announced today in a press release. 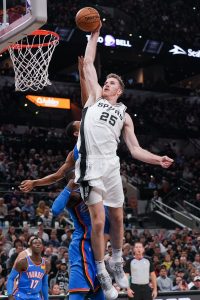 NOVEMBER 20: The Spurs are finalizing a three-year agreement with big man Jakob Poeltl, Shams Charania of The Athletic tweets. The deal will be worth approximately $27MM, Charania adds.

Poeltl was a restricted free agent, since the Spurs extended a qualifying offer of $4.6MM. That was a signal that San Antonio intended to keep him on a multi-year deal.

Poeltl began his career with Toronto and has spent the last two seasons in San Antonio. Last season, he averaged 5.6 PPG and 5.7 RPG in 17.7 MPG while appearing in 66 games, including 18 starts.

Although he’s not a major offensive weapon, the 25-year-old has shown promising rim-protecting ability (1.4 BPG) and brings effort and energy off the bench. He ranked 21st on our list of 2020’s top free agents.