10:42pm: The Clippers have officially re-signed Jackson, the team confirmed in a press release. 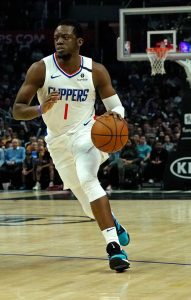 7:01pm: The Clippers have opted to re-sign reserve guard Reggie Jackson on a one-year contract, Adrian Wojnarowski of ESPN reports. Woj adds that Los Angeles anticipates that Jackson will “play a prominent role” in the club’s guard rotation.

After reaching a buyout agreement with the Pistons in February, Jackson joined the Clippers for the stretch run of the 2019/20 season as a key backcourt option off the bench. In 21.3 MPG across 17 regular season contests with Los Angeles, Jackson averaged 9.5 PPG, 3.2 APG, and 3.0 RPG. He also posted excellent shooting splits of .453/.413/.905.

As uncertainty clouds the fates of guards Patrick Beverley, the starting point guard, and Lou Williams, his primary backup, Jackson may wind up being a more crucial contributor for the 2020/21 season.

Bobby Marks of ESPN tweets that, because the Clippers are roughly $1MM below the NBA’s hard cap, the team will most likely waive the non-guaranteed $2.6MM veteran’s minimum contract of veteran reserve center Joakim Noah to make room for Jackson on the roster.

Los Angeles will be able to add one more player on a veteran’s minimum, Marks notes. A younger Noah replacement or wing depth would make sense for the Clippers. The club could also technically opt to waive Noah, then bring him back on a one-year veteran’s minimum deal, as the signing would represent a lower cap hit than retaining him.