JANUARY 23: The Wizards have made it official, announcing in a press release that they’ve signed Len. 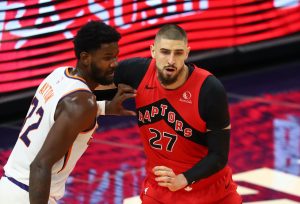 JANUARY 22: Free agent center Alex Len, who cleared waivers on Thursday after being released by the Raptors on Tuesday, has agreed to sign a one-year contract with the Wizards, reports Shams Charania of The Athletic (Twitter link).

According to Charania, Len had multiple suitors and chose the Wizards in part because of the clear path to playing time in D.C. — starting center Thomas Bryant tore his ACL earlier this month and will miss the rest of the season, while Anzejs Pasecniks was released this past weekend, leaving Robin Lopez as the only true center on the active roster.

The fifth overall pick in the 2013 draft, Len signed a one-year, $2.26MM contract with the Raptors in November, but didn’t see much action in his brief stint with the team. The 2.3 points and 10.9 minutes per game he averaged in seven contests with Toronto would’ve been his lowest marks since his rookie season.

Having waived Pasecniks a few days ago, the Wizards had an open spot on their 15-man roster, so no corresponding move will be required to make room for Len.

The big man will earn a prorated portion of the veteran’s minimum on his new deal with Washington, notes Chase Hughes of NBC Sports Washington (Twitter link). If the signing is officially completed today, Len would earn a $1,712,648 salary and the Wizards would take on a $1,276,472 cap hit.