MARCH 26: The trade is official, the Cavaliers announced in a press release. 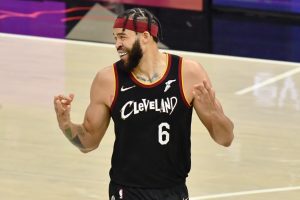 MARCH 25: The Cavaliers are finalizing a trade that will send veteran center JaVale McGee to the Nuggets, according to Shams Charania of The Athletic (Twitter link).

The move represents a reunion for McGee, who was previously traded to the Nuggets at the 2012 trade deadline and spent the next three years with the franchise. The 33-year-old has played for Philadelphia, Dallas, Golden State, the Lakers, and Cleveland since then, averaging 8.0 PPG and 5.2 RPG in 33 games (15.2 MPG) this season for the Cavs.

In his return to Denver, McGee figures to slide into the backup center role behind Nikola Jokic. Hartenstein was penciled into that role at the start of the season, but had a somewhat underwhelming year, with 3.5 PPG and 2.8 RPG in 30 games (9.1 MPG). JaMychal Green, Zeke Nnaji, and Bol Bol have also seen some occasional minutes at the five, but McGee should be a more reliable veteran option for the Nuggets’ second unit.

As Singer observes (via Twitter), the Cavs were one of the teams with interest in Hartenstein before he signed with Denver last fall, so the 22-year-old should take on a bigger role in Cleveland. However, the second-rounders the Cavs are acquiring in the swap are probably a bigger factor in the team’s willingness to make the deal.

Although Hartenstein’s minimum-salary contract isn’t big enough to match McGee’s $4.2MM expiring deal, the Nuggets will be able to absorb that money using a trade exception created in last November’s Jerami Grant sign-and-trade and will still have about $5.33MM left on that exception, which expires in the offseason. The Cavs will create a $4.2MM traded player exception in the deal, while the Nuggets will generate a new $1.62MM TPE.

McGee will be an unrestricted free agent this summer. Hartenstein has a minimum-salary player option for 2021/22.