Nuggets guard Jamal Murray, who left Monday’s game with a scary non-contact knee injury (video link), has been diagnosed with a torn left ACL, according to Shams Charania of The Athletic (Twitter link). The club confirmed the diagnosis, announcing that Murray will be out indefinitely. 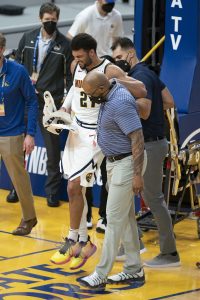 As we detailed earlier today, Murray suffered the injury during the fourth quarter of Denver’s loss to Golden State on Monday. His knee buckled as he attempted to take off for a layup and he immediately fell to the floor in obvious pain, pounding the court with his hand. He eventually refused the wheelchair that had been brought onto the floor and hopped to the locker room without putting any weight on his left leg (video link).

Murray had been scheduled to undergo testing today to determine the severity of the injury, and while there was some hope that there would be good news, those tests have instead confirmed the Nuggets’ worst fears.

Based on the typical recovery timeline for ACL tears, the injury will end Murray’s season, putting a serious dent into Denver’s title hopes. It will almost certainly delay his 2021/22 debut as well, since the NBA is looking to get back on its usual schedule, which would mean an October start.

It’s a crushing blow for a Nuggets team that has played some of its best basketball of the season as of late. Before losing its last two games, Denver had won 17 of 20 and appeared to have hit its stride since adding Aaron Gordon at the trade deadline.

At 34-20, the Nuggets rank fourth in the Western Conference and should still earn a playoff spot, but Murray’s absence will significantly reduce the likelihood of a deep postseason run. A year ago, the standout guard was Denver’s leading scorer in the playoffs, with 26.5 PPG on a scorching .505/.453/.897 shooting line in 19 games (39.6 MPG).

Prior to Murray’s ACL tear, the Nuggets had already been in the market for more backcourt depth, with Austin Rivers, Gerald Green, and Troy Daniels among the players on their radar. That search figures to intensify in the wake of Murray’s injury, as the club may now be able to offer those players a spot higher on the depth chart.

Murray, meanwhile, is scheduled to fly back to Denver with the team in the next few hours, according to Mike Singer of The Denver Post, who tweets that the 24-year-old’s surgery hasn’t yet been scheduled.