In recent days, some of the NBA’s more noteworthy free agents have come off the board.

Isaiah Thomas signed a 10-day contract with the Pelicans; DeMarcus Cousins agreed to a 10-day deal with the Clippers; Rondae Hollis-Jefferson reached a rest-of-season agreement with the Trail Blazers.

However, even with those players no longer available, there are still several familiar veteran names on our list of free agents. And with a number of teams around the NBA in need of at least one more player, it’s possible that many of those veteran FAs are generating some interest.

Here’s a check-in on some of the more notable names on the market:

The Pelicans opted for an offense-first player when they signed Thomas, but a team in need of a defensive point guard could look to Shaquille Harrison, who was waived in February by Utah.

Quinn Cook and Jalen Lecque are among the guards who were on NBA rosters for much of this season before being released, while Jeremy Lin and Gary Payton II are among those whose play in the G League bubble in the winter may have boosted their stock a little.

Brandon Knight is seeking an NBA comeback and reportedly worked out recently for the Bucks. Shabazz Napier, Emmanuel Mudiay, Yogi Ferrell, and Tim Frazier are among the other experienced options available. 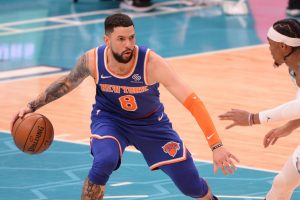 However, teams may look first as players who have been in the NBA more recently. That list includes vets like Austin Rivers, Ben McLemore, Iman Shumpert, Glenn Robinson III, and Sindarius Thornwell, as well as young players such as DaQuan Jeffries, Justin Jackson, and Terrance Ferguson. McLemore, Jeffries, and Jackson remain on waivers, so they’ll need to go unclaimed this week to formally reach free agency.

Teams in need of instant offense on the bench may take a look at Jabari Parker or Allonzo Trier, while clubs seeking a defensive stopper could target Andre Roberson.

It’s a bit surprising that Dewayne Dedmon hasn’t been on an NBA roster since 2020 — if he’s healthy and in shape, he should draw some interest from teams in need of a backup center. John Henson, Anthony Tolliver, Noah Vonleh, Vincent Poirier, and Tyler Zeller are among the other options for clubs seeking veteran depth.