Trail Blazers point guard Damian Lillard has been named the winner of the 2020/2021 Twyman-Stokes Teammate of the Year Award, the league announced today. 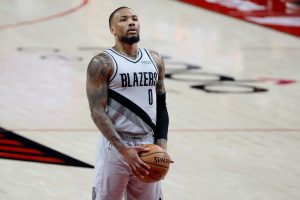 A panel of league executives selected 12 candidates, six from each conference, and current NBA players selected the winner from the list of 12 choices. The award is given to the player “deemed the best teammate based on selfless play, on- and off-court leadership as a mentor and role model to other NBA players, and commitment and dedication to team.”

Lillard averaged 28.8 points and 7.5 assists this season while leading the Blazers to a six seed in the Western Conference. He was also named to his sixth All Star game. Lillard received his third NBA Cares Community Assist Award presented by Kaiser Permanente in April for his work empowering the youth of Portland, and has previously won the 2018/19 J. Walter Kennedy Citizenship Award for outstanding service and dedication to his community.

The Trail Blazers are currently down 3-2 in their first round playoff series against the Nuggets, in which Lillard is averaging a playoff career high 35.6 points a night to go with 9.6 assists. They’ll look to extend their season tonight.

16 thoughts on “Damian Lillard Wins Teammate Of The Year Award”