With Tuesday night’s lottery results now official, the top 14 slots for the 2021 NBA draft have been set. The lottery order is as follows: 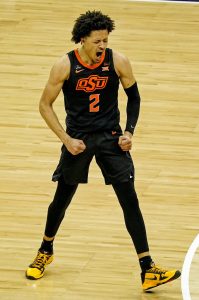 It’s a huge win for the Pistons and for general manager Troy Weaver, who had one of the best drafts of any NBA team in 2020, nabbing Killian Hayes, Isaiah Stewart, Saddiq Bey, and Saben Lee. This time around, Detroit is in position to draft Oklahoma State guard Cade Cunningham, who is widely considered to be the No. 1 prospect in the 2021 draft class.

According to Adrian Wojnarowski of ESPN (Twitter link), the plan is for Cunningham to visit just one team before the July 29 draft: the Pistons.

The Rockets, like Detroit, entered the night with the best odds at landing a top-four pick (52.1%). And while they ended up at No. 2 rather than No. 1, it’s a major relief for the franchise, which would have had to send its pick to the Thunder in exchange for the No. 18 selection if it had landed outside of the top four.

Rather than falling out of the lottery, Houston is poised to take its pick from a top tier of prospects that includes Evan Mobley, Jalen Suggs, Jalen Green, and Jonathan Kuminga. Whichever player the Rockets select figures to become the centerpiece of the team’s rebuild.

The Cavaliers and Raptors moved up in the lottery standings, from fifth and seventh respectively, into the top four. As we noted in our Cavs offseason preview earlier today, Cleveland hasn’t missed on any of its recent lottery picks, but also hasn’t landed a prospect who looks capable of being the club’s franchise player. The Cavs may get that opportunity in 2021.

As for the Raptors, after making the playoffs for seven straight seasons and winning a title in 2019, they had a disastrous 2020/21 campaign, displaced from their home in Toronto due to the coronavirus pandemic and dealing with constant COVID-19 and injury issues. They’re now in position to add an intriguing young player to a core that already includes Fred VanVleet, Pascal Siakam, and OG Anunoby.

Although none of the teams that moved into the top four did so from the bottom half of the lottery, it’s worth noting that the No. 7 spot in the lottery standings has been especially lucky since the NBA revamped the format three years ago. The Pelicans moved up to No. 1 from that position in 2019, allowing them to draft Zion Williamson. In 2020, the Hornets moved from No. 7 to No. 3, putting them in position to select eventual Rookie of the Year LaMelo Ball. Now the Raptors have moved up from that spot too.

The night’s biggest losers include the Timberwolves and Bulls, who would have held onto their lottery picks if they had moved into the top three and the top four, respectively. Instead, those picks will be sent to the Warriors and Magic at No. 7 and No. 8.

The Magic‘s own pick and the Thunder‘s selection slipped two spots as a result of the lottery — they’ll pick at No. 5 and No. 6.

It was still a good night for the Magic, who control two of the top eight picks in a strong draft, but the outcome wasn’t great for Oklahoma City. The Thunder entered the evening with the potential to come away with two top-five picks. Instead, they’ll have zero, having lost the ability to swap first-rounders with Houston.

The 9-14 picks in the draft lottery standings remained unchanged.