Clippers center/power forward Serge Ibaka will exercise his player option for next season, tweets Shams Charania of The Athletic. 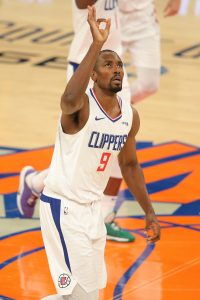 Ibaka, 31, will make $9.7MM next season before becoming an unrestricted free agent in the summer of 2022. He signed a two-year, $19MM contract last November that included the player option in the second season.

Ibaka’s first season in L.A. was marred by injuries that limited him to 41 games during the regular season and two brief appearances in the playoffs. He was the starting center before back issues derailed his year, averaging 11.1 points, 6.7 rebounds and 1.1 blocks per night.

The decision by Ibaka virtually eliminates any thoughts the Clippers may have entertained about using the non-taxpayer mid-level exception this offseason, according to John Hollinger of The Athletic (Twitter link).

The Clippers, of course, are still waiting on another big player option decision, as Kawhi Leonard will have to decide whether to opt into a $36MM+ salary. Despite his ACL injury, the expectation is that Leonard will turn down his option to sign a more lucrative – and perhaps a longer-term – deal with Los Angeles.