AUGUST 6: The Bucks have officially signed Ojeleye, the team announced on Friday (via Twitter). 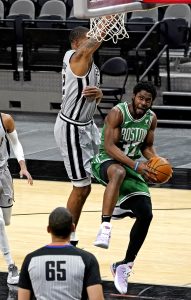 Eric Nehm of The Athletic reports (Twitter link) that Ojeleye is set to join the Bucks on a one-year, minimum-salary contract.

Selected with the No. 37 pick in the 2017 NBA draft out of SMU by the Celtics, the 6’6″ forward spent his first four NBA seasons in Boston. Though not much of a scorer (his career-best average thus far is 4.6 PPG in 2020/21), Ojeleye nevertheless found his way into the rotation for the Celtics’ various playoff-bound teams over the years, including two Eastern Conference Finals teams in 2018 and 2020.

A versatile defender, Ojeleye could fill the absence left by veteran tweener forward P.J. Tucker, who is expected to depart for the Heat after agreeing to a new two-year,  $15MM deal.