AUGUST 7: The signing is official, according to a team press release.

“P.J. Tucker is the perfect addition to this team,” Heat president Pat Riley said. “He brings both shooting and most importantly, the ability to defend a lot of perimeter players. We love his versatility in order to put a defensive team on the court, where all five guys can defend, while also having enough shooting and scoring to win games.”

AUGUST 2: The Heat have agreed to a deal with free agent forward P.J. Tucker, sources tell Shams Charania of The Athletic (Twitter link). 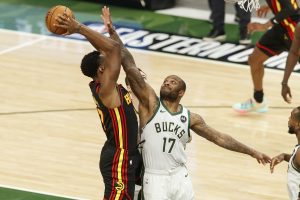 According to Charania (Twitter link), Tucker will get a two-year, $15MM contract from Miami, which suggests the team is putting a chunk of its mid-level exception toward the signing. The deal will feature a player option in year two, Charania adds (via Twitter).

Tucker doesn’t bring much to the table on offense besides the occasional corner three (he’s a career 35.9% shooter from beyond the arc), but he’s a physical, versatile defender who is just as willing to battle in the post with centers as he is to guard quicker guards and wings on the perimeter.

Tucker will fit in nicely on a Heat squad that already features tough defenders like Bam Adebayo, Jimmy Butler, and Kyle Lowry.

The Heat had been looking to address their power forward position with their mid-level exception and will likely remain on the lookout for at least one more player who can play minutes at the four, though their cap flexibility is now limited. Barry Jackson of The Miami Herald reports (via Twitter) that the club has an offer out to veteran forward Markieff Morris.