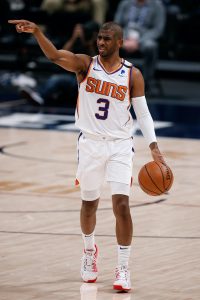 AUGUST 3: Paul’s new four-year deal is a little more team-friendly than the initial reports suggested, according to John Gambadoro of Arizona Sports 98.7 (Twitter links), who says the third year will only be about 50% guaranteed and the fourth year will be a team option.

While the deal could be worth $120MM if Paul plays out the whole thing, Gambadoro suggests it only features about $75MM in fully guaranteed money.

AUGUST 2: Free agent point guard Chris Paul has agreed to a four-year contract with the Suns that could be worth up to $120MM, reports Chris Haynes of Yahoo Sports (Twitter link). Paul will turn 40 years old in 2025, the year the deal expires.

Paul turned down a $44MM player option with Phoenix on Sunday in order to lock in a more lucrative longer-term deal. The Suns were the only team that could have offered him more than three years due to the NBA’s Over-38 rule, so it’s possible that helped push the deal over the finish line.

“After this season in Phoenix and experiencing how amazing the fans were, my chemistry with my teammates, with (Devin Booker), with Monty (Williams), I knew Phoenix was where I wanted to be,” Paul told Haynes. “It’s time to get back to work.”

According to Marc J. Spears of The Undefeated, Paul underwent surgery on his left wrist shortly after the NBA Finals ended last month. However, he’s expected to be ready for the start of training camp in the fall, a source tells Spears.

Paul, who has played for four teams in the last five seasons, had one of the best years of his decorated career with Phoenix in 2020/21. His individual numbers – including 16.4 PPG, 8.9 APG, and 4.5 RPG in 70 games (31.4 MPG) – weren’t as impressive as the ones he was posting earlier in his career, but he helped turned the Suns from a lottery team into a legit contender.

Phoenix finished the season with the NBA’s second-best record and represented the Western Conference in the NBA Finals, taking a 2-0 lead over Milwaukee before dropping the next four games. Paul earned Second Team All-NBA honors and a top-five finish in MVP voting as a result of his impressive season.

Because Paul’s 2021/22 salary will now be significantly lower than the $44MM+ he would’ve earned if he had picked up his option, the Suns now have some added cap flexibility for the coming season, allowing the team to make use of its mid-level exception. However, the club projects to be deep into the tax in future years if it completes long-term extensions with Deandre Ayton and Mikal Bridges, as is expected.