AUGUST 8: McDermott has joined the Spurs in a sign-and-trade deal, the Pacers announced in a press release. 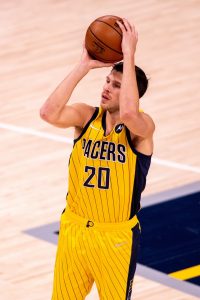 AUGUST 2: Pacers free agent forward Doug McDermott has agreed to a three-year, $42MM deal with the Spurs, Shams Charania of The Athletic tweets.

McDermott’s most recent contract, which he signed with Indiana in 2018, was a three-year deal worth $22MM.

Retaining McDermott at the number he agreed to with the Spurs would have added to the Pacers’ luxury tax concerns, though they were hoping to re-sign him.

The Pelicans, Suns, and Nuggets were among the teams that were rumored to be potential suitors for the 29-year-old McDermott. The Spurs had an edge over many other teams due to ample cap space, while many others could only offer their $9.536MM mid-level exception.

San Antonio could simply sign McDermott with its cap room or work out a sign-and-trade with Indiana.