AUGUST 6: Hill’s deal with the Bucks is now official, according to the team (Twitter link). 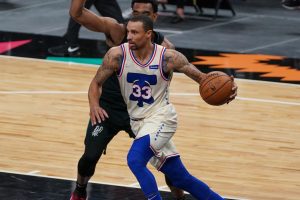 AUGUST 5: Having cleared waivers, Hill is now on track to sign with the Bucks, according to Charania, who reports (via Twitter) that the guard will sign a two-year, $8MM contract with Milwaukee. That money will come out of the team’s mid-level exception.

Both years of the deal will be guaranteed, tweets Eric Nehm of The Athletic.

AUGUST 3: Veteran point guard George Hill, who was released on Tuesday by the Sixers, intends to rejoin the Bucks after he clears waivers later this week, sources tell Shams Charania of The Athletic (Twitter link).

While it’s still possible that Hill could be claimed on waivers by a team with cap room or a large trade exception, it’s unlikely that any club would want to guarantee his $10MM+ salary, so it’s a safe bet he’ll become a free agent.

Hill played for the Bucks in 2019/20, averaging 9.4 PPG and 3.1 APG with a league-high .460 3PT% in 59 games as the club’s third guard. However, he became expendable when his contract was needed for salary-matching purposes in the Jrue Holiday trade.

The Bucks are now eyeing deals with two veterans who are currently on waivers. A report earlier on Tuesday indicated that Milwaukee is expected to sign Rodney Hood, who was cut today by Toronto.