AUGUST 9: A week after agreeing to sign him, the Hawks have now finalized Dieng’s deal, the team announced today in a press release. 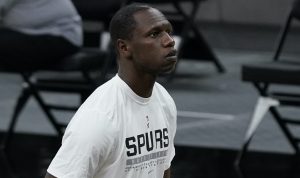 “With the signing of Gorgui, we’ve added more size and depth to our frontcourt rotation. He’s an experienced big with length who can space the floor and defend,” president of basketball operations Travis Schlenk said in a statement.

It looks like Dieng’s contract will use part of Atlanta’s mid-level exception.

While he wasn’t exactly a bargain on his previous four-year, $63MM contract, Dieng should be a much better value at $4MM. He’ll be a nice fit in the Hawks’ frontcourt behind starting center Clint Capela and should see regular minutes while Onyeka Okongwu recovers from shoulder surgery, if not beyond that.

Given the reported terms on Dieng’s deal, the Hawks could either be using a portion of the mid-level exception or the bi-annual exception to complete the signing. The BAE is worth about $3.7MM this season.