AUGUST 12: Ten days after agreeing to terms with the Nuggets, Green has officially signed his new contract, the club announced in a press release. 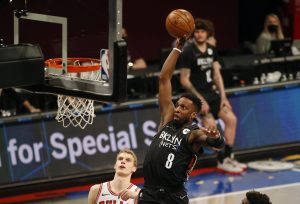 “We are very excited to welcome Jeff and his family to Denver,” Nuggets president of basketball operations Tim Connelly said in a statement. “He brings a wealth of experience to our team; his impact will be felt both on the court and in the locker room.”

The deal will include a player option in the second year, Andrews adds. The Nuggets will likely use a portion of their $9.536MM mid-level exception to sign Green.

The well-traveled Green has passed through 10 organizations in a career that began in 2007 with the Seattle SuperSonics. Green, who will turn 35 this month, has revived his career after Utah waived him during the 2019/20 season.

He had a successful run with Houston the remainder of that season, including several productive playoff performances. In his lone season with Brooklyn, he averaged 11.0 PPG and 3.9 RPG while making a career-high 41.2% of his 3-point tries in 68 regular-season games, including 38 starts.

Denver also agreed to re-sign JaMychal Green on Monday. That increases the possibility that another one of its free agent big men, Paul Millsap, will sign elsewhere.