AUGUST 17: The Knicks have now officially re-signed Burks as well, according to NBA.com’s transactions log.

AUGUST 10: The Knicks’ deal with Noel is official, per NBA.com’s transactions log. As noted last week, the three-year contract includes a team option for the 2023/24 season. 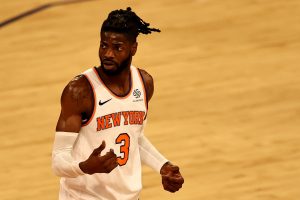 According to Wojnarowski, Burks’ new deal will be worth $30MM over three years, while Noel will get a three-year contract worth $32MM.

Burks had been viewed as a probable target for the Cavaliers, while Noel had been linked to the Raptors, Knicks, Hornets, and Kings. However, the Knicks entered the day with more cap flexibility than any other team, putting them in good position to get deals done with their priority free agents.

New York should still have upwards of $30MM+ in possible cap room after making their commitments to Burks and Noel.