AUGUST 10: The extension is now official, according to the team (Twitter link). 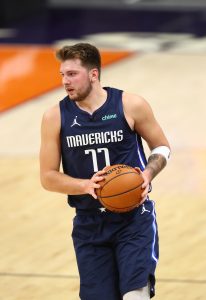 AUGUST 9: The Mavs and Doncic are in formal agreement on their five-year, maximum-salary extension, agent Bill Duffy tells Adrian Wojnarowski of ESPN. The team sent a contingent to Slovenia this week to officially complete the deal and will hold a news conference on Tuesday morning to announce it.

As we detailed earlier today, Doncic’s extension projects to be worth slightly over $207MM based on the NBA’s $119MM cap projection for 2022/23. The deal will include a fifth-year player option, Wojnarowski adds (via Twitter).

“Today is a dream come true,” Doncic said in a statement, per Woj (Twitter link). “I am humbled and excited to remain in Dallas as part of the Mavericks and appreciate the support of my fans.”

AUGUST 2: The Mavericks are ready to give star guard Luka Doncic a five-year, maximum-salary extension, tweets veteran NBA reporter Marc Stein. The deal projects to be worth $207.06MM.

However, no formal talks will take place until after Doncic is finished with the Olympics this week. His Slovenian team is in the medal round after breezing to three victories in preliminary games.

Doncic, 22, has emerged as one of the NBA’s top players after three seasons in the league. He averaged 27.7 points, 8.0 rebounds and 8.6 assists in 66 games this year, earning first-team All-NBA honors for the second straight season.

Doncic was named Rookie of the Year in 2019 and is a two-time All-Star. He was highly decorated before coming to the NBA, winning MVP and Final Four MVP awards in the EuroLeague in 2018.

Doncic’s extension, which would have a starting salary worth 30% of the cap, would take effect in the 2022/23 season and would keep him under contract through the summer of 2027.