AUGUST 9: The Nets have officially announced the re-signing of Griffin in a press release. Terms of the agreement weren’t disclosed, but as noted below, it’s reportedly worth the minimum. Nabbing Griffin at that price is a serious discount for a player who proved to be a solid starter on one of the best teams in the league. 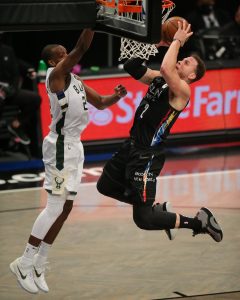 AUGUST 3: Griffin’s one-year deal with the Nets will be worth the veteran’s minimum, tweets Michael Scotto of HoopsHype.

AUGUST 2: The Nets have agreed to terms with Blake Griffin on a one-year contract that will keep the veteran forward in Brooklyn, agent Sam Goldfeder tells ESPN’s Adrian Wojnarowski (Twitter link). Terms of the contract have yet to be disclosed.

After surrendering $13.3MM to the Pistons in a buyout agreement, Griffin signed on with the Nets for the rest of the year on a single-season veteran’s minimum contract.

A six-time All-Star with Detroit and the Clippers, Griffin’s tenure as an NBA first option was abbreviated due to a series of injuries.

The 32-year-old veteran thoroughly reinvented himself while with Brooklyn, maximizing some of his still-potent athleticism on a star-studded Nets team to become a valuable two-way big man, equally adept as a power forward and small ball center, and surprisingly agile as a defender.

Griffin boasts career averages of 20.9 PPG, 8.6 RPG, 4.3 APG and 0.9 SPG. In his new reality as a valuable role player, the 6’9″ Griffin had a significantly more modest output with Brooklyn.

Retaining Griffin is a boon for Brooklyn, a team that boasts three expensive All-NBA talents (when healthy) in forward Kevin Durant and guards James Harden and Kyrie Irving, plus pricey sharpshooting wing Joe Harris. With Irving and Harden limited by injuries, the Nets lost a hotly-contested seven-game second round Eastern Conference playoff series to the eventual champion Bucks. If the team is healthy by the 2022 playoffs, it’s shaping up to once again be one of the most formidable clubs in the league.