AUGUST 6: The Pacers have officially re-signed McConnell, announcing the transaction in a press release. 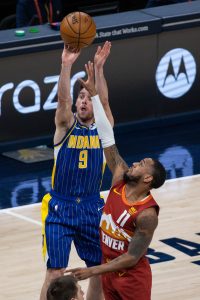 “We are very pleased to re-sign T.J. McConnell,” Pacers president of basketball operations Kevin Pritchard said in a statement. “This franchise and our fan base knows what T.J. brings to this team: leadership, tenacity and an insatiable desire to win. T.J. has arrived at this point in his career with hard work, patience and overcoming doubters. But he never doubted in himself. He was undrafted and it takes a special kind of player to not only overcome that obstacle, but to turn it into what will likely be a long NBA career. That is a testament to what kind of work ethic and competitive fire T.J. has.”

AUGUST 2: The Pacers and point guard T.J. McConnell have agreed to terms on a contract that will keep him in Indiana for the foreseeable future, reports J. Michael of The Indianapolis Star (Twitter link).

The deal will be worth $35MM over four seasons, according to Shams Charania of The Athletic (Twitter link). Michael adds that the final year will only be partially guaranteed (Twitter link).

The 29-year-old had been expected to draw interest from teams in need of point guard depth, but there was always mutual interest between him and the Pacers.

Indiana had been considered more likely to re-sign McConnell than fellow free agent Doug McDermott, and that’s exactly what happened, as McDermott is San Antonio-bound.