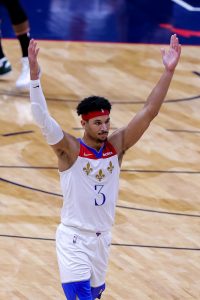 Woj reports that the contract will be a three-year, $38MM deal. New Orleans had Hart’s Bird rights, so no cap room maneuvering or exceptions are necessary to make the deal work.

The 6’5″ wing was part of the loaded package of young players and draft picks that arrived in New Orleans in the deal that sent All-Star big man Anthony Davis to the Lakers in the summer of 2019.

Hart, 26, was selected with the No. 30 pick in the 2017 NBA draft out of Villanova. He spent his first two seasons in Los Angeles, showing promising flashes as an intriguing two-way swingman.

Hart will be the Pelicans’ 15th player on a guaranteed contract, which means that power forward Wenyen Gabriel, currently on a non-guaranteed $1,762,796 contract for the 2021/22 season, looks like the odd man out.

Woj adds that the deal looks set to be concluded soon. Will Guillory of The Athletic echoes this sentiment, tweeting that “a few details” in the contract still need to be finessed.