AUGUST 6: The Sixers have officially signed Niang, the team announced today in a press release. 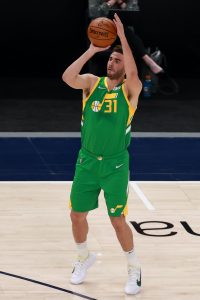 “Georges is a talented player who can stretch the floor and he immediately bolsters our frontcourt depth,” president of basketball operations Daryl Morey said in a statement. “He has shot over 40-percent from three for his career and has steadily improved his overall game each season he’s been in the NBA. We’re excited to welcome him to Philadelphia.”

AUGUST 3: The Sixers have agreed to terms on a two-year deal with free agent forward Georges Niang, according to Ben Dowsett, who reports (via Twitter) that Niang’s contract will be worth $6.7MM.

Niang, 28, has spent the last four seasons in Utah after beginning his NBA career with the Pacers. He had his best season in 2020/21, earning regular minutes (16.0 MPG) for a Jazz squad that finished the regular season with the NBA’s best record.

Niang appeared in all 72 games, averaging 6.9 PPG and 2.4 RPG with an impressive .425 3PT%. It was the third straight year in which he made at least 40% of his three-point attempts. The former Iowa State standout also has the size necessary to match up with threes and fours on defense.

We’ll have to wait to see what other moves Philadelphia makes this week before we know exactly how the team completes the Niang signing. Based on the reported terms of the agreement, it would comfortably fit within either the mid-level exception or the bi-annual exception, though Kyle Neubeck of PhillyVoice.com (Twitter link) suggests the plan is to use part of the MLE.

Keith Pompey of The Philadelphia Inquirer reported earlier today that Niang was on Philadelphia’s radar.