AUGUST 6: The Thunder have officially signed Gilgeous-Alexander to his extension, the team announced today in a press release. 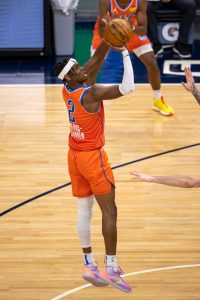 “We are excited to have Shai representing our organization for many years to come and couldn’t be happier for him and his family,” Thunder GM Sam Presti said in a statement. “He is a tremendous basketball player, but is also a leader that infuses optimism, confidence and collaboration into all of his interactions professionally and personally. We are looking forward to watching his individual growth and the collective development of our team as we continue on our path toward sustainable success in Oklahoma City.”

Adrian Wojnarowski of ESPN writes (via Twitter) that the contract will include a 30% “escalator clause” that could increase the $172MM base of the deal into a $207MM agreement, provided Gilgeous-Alexander is voted onto one of the three All-NBA teams in 2022. Woj adds that there are no early termination options for either side in the new extension.

The 6’6″ combo guard was selected with No. 11 pick in the 2018 draft out of Kentucky and enjoyed an All-Rookie Second Team-caliber debut NBA season with the Clippers. He was the key element in a pick-heavy trade that sent All-Star forward Paul George to Los Angeles, and has since proved his mettle in two seasons with Oklahoma City.

An excellent scorer with room to grow on defense, Gilgeous-Alexander has future All-Star potential. The Thunder were wise to lock him in to a long-term deal, even though the team appears more interested in asset accrual over winning in the short term.