AUGUST 20: The signing is official, according to a team press release. 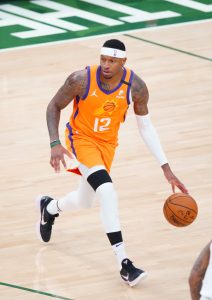 “Torrey is known for toughness, defense and being a great team guy,” Pacers president Kevin Pritchard said. “As a player who went undrafted, Torrey got to where he is through hard work and perseverance. He will be a great addition to our depth and our emphasis on defense.”

AUGUST 2: The Pacers are set to ink veteran free agent swingman Torrey Craig, most recently of the Bucks and Suns, to a two-year, $10MM contract, writes Adrian Wojnarowski of ESPN (via Twitter).

Bobby Marks of ESPN adds (Twitter link) that the Pacers will use a portion of their mid-level exception to sign the 6’7″ Craig. The deal is fully guaranteed, per Scott Agness of Fieldhouse Files (Twitter link).

The only player to have logged significant time playing for both NBA Finals teams during the 2020/21 season, Craig unfortunately found himself on the losing side with Phoenix, though he carved out a role for himself as a versatile, defense-first wing contributor.

After going undrafted out of USC Upstate in 2014, Craig first logged NBA action as a 26-year-old with the Nuggets in 2017. He signed a one-year deal with the Bucks as a free agent in 2020.