The Nuggets and forward Aaron Gordon have reached an agreement on a four-year extension, agent Calvin Andrews of Klutch Sports tells Shams Charania of The Athletic (Twitter link). According to Charania, the deal is worth $92MM and includes a fourth-year player option for 2025/26. 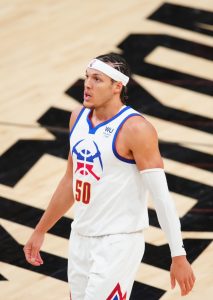 Mike Singer of The Denver Post reported in late August that the Nuggets and Gordon had mutual interest in an extension and would likely reach a deal soon. At that point, Singer anticipated a two- or three-year extension in the range of $20-21MM per year, but it sounds like Denver was willing to go higher to get the former fourth overall pick locked up long-term.

Gordon will earn a base salary of $16,409,091 in 2021/22 – the last year of his current contract – with an extra $1MM available in unlikely incentives. A veteran extension allows for a starting salary 20% higher than the player’s previous salary, and it looks like the Nuggets are going that route with Gordon — his maximum extension would have a base value of about $88.2MM over four years. Adding $1MM in annual unlikely incentives (for All-Star, All-NBA, and All-Defense nods) bumps the total up to the $92MM figure reported by Charania.

After spending the first six years of his career with the Magic, Gordon was part of a midseason trade in his seventh season, having been sent from the Magic to the Nuggets at the 2021 trade deadline. The athletic forward, who will turn 26 on Thursday, helped shore up Denver’s defense down the stretch, though his counting stats (10.2 PPG, 4.7 RPG, 2.2 APG on .500/.266/.705 shooting) in 25 games with the club were modest.

Now that Gordon will have a full offseason and training camp as a Nugget under his belt, the team will likely have higher expectations for him going forward. His new extension will make him an important part of a core that also includes Nikola Jokic, Jamal Murray, and Michael Porter Jr. Jokic is under contract through 2023, Murray is locked up through 2025, and Porter is entering a contract year, though he’s a good bet to sign an extension of his own before opening night.