The Nets are landing one of the top free agents left on the market, agreeing to a deal with Paul Millsap, tweets Shams Charania of The Athletic. The deal was confirmed by Millsap’s agent, DeAngelo Simmons. 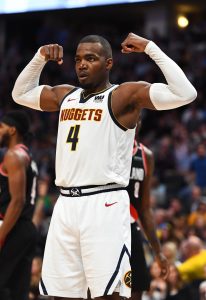 Numerous teams had expressed interest in the 36-year-old power forward, who spent the past four seasons in Denver. According to Charania, Millsap considered other contending teams, such as the Warriors, Bulls and Clippers, before deciding on Brooklyn (Twitter link).

The Nets were only able to offer a veteran’s minimum salary, but Millsap is looking for a chance to win a title, and Brooklyn is among the favorites for the upcoming season.

Millsap remained a productive player for the Nuggets last year in his 15th NBA season, averaging 9.0 points and 4.7 rebounds in 20.8 minutes per night. He started 36 of the 56 games he played, although his usage declined in the postseason.

The addition of Millsap would bring the Nets to 20 players heading into camp if they sign second-round draft picks Marcus Zegarowski and RaiQuan Gray. The team still has one of its two-way slots open.

Having another big man on the roster should lead to further speculation of a potential buyout for DeAndre Jordan. There has been talk that Brooklyn wants to get out from under Jordan’s contract, which will pay him $19.7MM over the next two seasons.