Hoops Rumors is breaking down the 2021 offseason for all 30 NBA teams, revisiting the summer’s free agent signings, trades, draft picks, departures, and more. We’ll evaluate each team’s offseason moves, examine what still needs to be done before opening night, and look ahead to what the 2021/22 season holds for all 30 franchises. Today, we’re focusing on the Memphis Grizzlies.

The Grizzlies and franchise player Ja Morant got a taste of the postseason during the spring, advancing through the play-in round, then losing to the top-seeded Jazz 4-1 in the first round of the Western Conference playoffs. Morant averaged 30.2 PPG and 8.2 APG in the series, a sign the team can count on its point guard to ramp up his production under the spotlight of the playoffs. 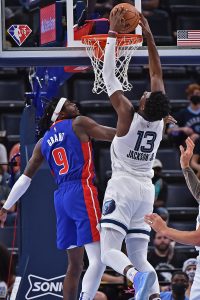 Memphis’ offseason moves were designed to build on that momentum and the front office was active, though it didn’t do anything that would be considered splashy. The Grizzlies’ biggest transactions involved their frontcourt. Jaren Jackson Jr. appeared in just 11 regular-season games due to a knee injury and there was some uncertainty about whether they still viewed him as a cornerstone piece.

Memphis vanquished those doubts by handing the 22-year-old a four-year, $104.7MM contract, though the club gained a little protection through an injury clause. Jackson’s versatile offensive game and shot-blocking made such a commitment a worthwhile gamble. It was also a signal to Morant that front office plans to grow a young core around him with his potential max extension looming next offseason.

The move to bring in Steven Adams was somewhat curious. Following some solid seasons in Oklahoma City, Adams struggled to fit in with a young New Orleans team after being traded to the Pelicans last offseason. Before he suited up for the team, the Pels signed Adams to a two-year extension, which kicks in this season. The Grizzlies’ thinking is that Adams’ lack of a perimeter game won’t be a factor when paired up with a stretch four like Jackson. If all goes well, Adams should be their top rebounder while providing more physicality to their defense.

Though the Grizzlies made a number of trades, they were mainly motivated by adding to their draft capital. The most noteworthy future pick was the 2022 first-rounder they picked up from the Lakers, though naturally it figures to fall fairly low in the first round unless the Lakers are decimated by injuries this season. Memphis also owns Utah’s first-rounder in the next draft, giving the team some flexibility to maneuver and move up the draft or deal for an impact veteran.

The Grizzlies used the lottery pick they acquired in this year’s draft on an intriguing swingman in Stanford’s Ziaire Williams, though he’ll likely spend a good chunk of his rookie season developing his game in the G League.

Memphis took a flyer on another unfinished product in Jarrett Culver, the sixth pick in the 2019 draft. Still just 22, Culver never found a niche with the rebuilding Timberwolves. He could emerge as a defensive force on a playoff-caliber team.

The preseason didn’t end well for the Grizzlies, as the club revealed starting shooting guard Dillon Brooks will miss time while he continues to recover from a fractured hand. However, Memphis proved last season in Jackson’s absence that it can overcome a lengthy injury to a key player and still make the playoffs.

Naturally, the one player the Grizzlies can’t afford to lose for any extended period is Morant. As long as he’s at the controls, the team will remain in the postseason hunt. A full season from Jackson, as well as a bounce-back campaign from Adams, would also keep the franchise headed in the right direction.

Ultimately, the Grizzlies are still in need of another star at the wing position to become a serious contender. Perhaps they’ll cash in some of those extra first-rounders before the trade deadline or wait until next offseason to pursue that route. An appearance in the second round of the playoffs would probably be the ceiling for the current roster.