OCTOBER 16: Carter has signed the extension, according to a team press release (Twitter link).

“Even in his relatively short time in the league, Wendell has proven to be a true professional,” team president Jeff Weltman said. “We are very happy that he will continue to build on his promising career here in Orlando.”

OCTOBER 15: The Magic have agreed to a four-year, $50MM contract extension for center Wendell Carter Jr., Anthony Fields of Vanguard Sports Group tells Shams Charania of The Athletic (Twitter link). According to Charania, the deal will be fully guaranteed. 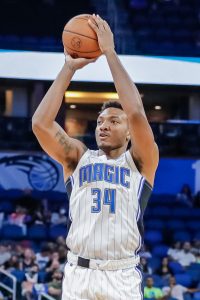 Carter, 22, was selected by the Bulls with the seventh overall pick in the 2018 draft. Although he showed promise during his two-and-a-half years in Chicago, Carter battled injuries and didn’t substantially increase his rookie-year production in his second and third seasons.

The big man was dealt to Orlando at the 2021 trade deadline in the blockbuster deal that sent Nikola Vucevic in Chicago. He took over the Magic’s starting center job down the stretch and averaged 11.7 PPG, 8.8 RPG, and 1.6 APG in 22 games (26.5 MPG).

It wasn’t clear this offseason whether the Magic were ready to commit long-term to Carter or if they wanted to see more from him in 2021/22. It seems the team has answered that question, taking the same route with Carter than it did a year ago with Jonathan Isaac and Markelle Fultz, who both signed multiyear rookie scale extensions that kept them off the restricted free agent market in 2021.

Isaac got about $20MM more than Carter did on his own four-year extension. Fultz’s deal was also worth $50MM, but covers just three years. The closest recent comparable for Carter’s four-year, $50MM deal – which will go into effect in 2022/23 – is the extension that Robert Williams signed with the Celtics earlier this offseason. Williams will make $48MM over four years, with $6MM more available in incentives.

Deandre Ayton, Mikal Bridges, Collin Sexton, and Jaren Jackson Jr. are among the remaining extension candidates worth watching in the coming days. Carter’s fellow Magic center, Mohamed Bamba, is also among those eligible for a rookie extension, but is considered extremely unlikely to sign one.