OCTOBER 18: The Suns have officially completed Bridges’ extension, the team announced today in a press release. 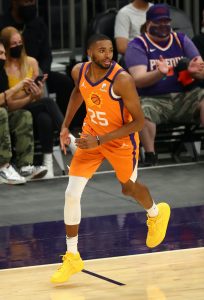 OCTOBER 17: The Suns have reached a deal to sign swingman Mikal Bridges to a four-year, $90MM rookie contract extension, according to Adrian Wojnarowski of ESPN, who says the deal will be fully guaranteed. Bridges’ agents at Excel Sports Management, Sam Goldfeder and Jordan Gertler, informed Woj of the news.

Bridges, the tenth overall pick in the 2018 draft out of Villanova (where he won NCAA titles in 2016 and 2018), proved to be a crucial two-way contributor on a Phoenix club that broke through for its first NBA Finals appearance in 28 years during the 2020/21 season.

Retaining Bridges, who still has All-Star upside, on a deal that will pay him $22.5MM annually through the 2025/26 season is a massive victory for Suns general manager James Jones.

Woj notes that the Suns are still having conversations about a possible extension for Ayton ahead of tomorrow’s deadline, in addition to newly-added reserve shooting guard Landry Shamet, the No. 26 selection in 2018 out of Wichita State.

“He is the player who buys into a culture as well as sets a culture,” Goldfelder said of his client.

“Mikal has worked tirelessly to bring winning basketball back to the Phoenix Suns,” Gertler said. “This is the culmination of his hard work.”