9:13pm: The signing under the hardship exception is official, according to a team press release.

12:40pm: The Trail Blazers intend to sign center Drew Eubanks to another 10-day contract, which will be his fourth consecutive deal with the team, sources tell ESPN’s Adrian Wojnarowski (via Twitter). 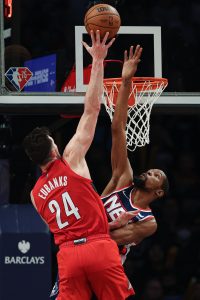 Portland has at least six such players – Nurkic, Damian Lillard, Nassir Little, Didi Louzada, Joe Ingles, and Eric Bledsoe – and possibly as many as seven, if Anfernee Simons isn’t expected to return soon. That’s why the club is eligible for the hardship exception.