10:44am: Toronto has officially signed Brooks, the team announced in a press release.

9:12am: The Raptors intend to sign Armoni Brooks to two-year contract, sources tell Shams Charania of The Athletic (via Twitter). The deal will include a partial guarantee for 2022/23. 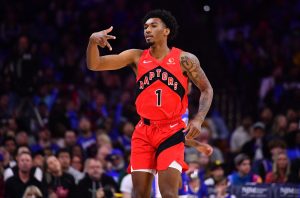 Brooks will receive more than the minimum salary for the remainder of this season because the Raptors still have part of their mid-level exception to spend, according to Blake Murphy of Sportsnet (Twitter link), who adds that Brooks’ partial guarantee for next season is $250K.

In a separate tweet, Murphy notes that Brooks likely moved ahead of Justin Champagnie for the 15th and final standard roster spot — Champagnie is currently on a two-way deal and won’t be eligible for the playoffs, barring another roster move.

Brooks was previously signed to a couple of 10-day contracts by Toronto, and the team clearly liked what it saw out of the young guard. His second 10-day deal expired overnight on Friday, so the Raptors had to either sign him for the rest of the season or let him walk, since players can’t sign more than two standard 10-day contracts with the same club in a single season.

Coach Nick Nurse had said on Friday that he expected Brooks to be brought back (Twitter link via Josh Lewenberg of TSN Sports).

Through eight games with the Raptors, Brooks has averaged 2.9 points and 1.4 rebounds in 11.1 minutes per night in a limited role. However, he’s been a regular part of the team’s rotation of late, averaging 6.7 points and a steal on 40% shooting from deep over the past three games.

Eric Koreen of The Athletic explored Brooks’ fit with the Raptors a few days ago, stating that while the young guard might not fit the mold of the rest of the team, Toronto can use his long-range shooting ability — as long as he’s hitting those shots.

“It’s just trusting your work. Your shots are not gonna fall every single night. Even the best shooters have slumps. It’s just part of the game. You can have good looks and they won’t fall, but you have just got to trust that you put in the work and eventually results will turn in your favor,” Brooks said.

Brooks, 23, signed with Houston as a two-way player last year and was converted to a standard contract in October of 2021. He had a nice run with the Rockets last season, averaging 11.2 points and 3.4 rebounds on 38.2% from deep in 20 games. He was waived by Houston last month to accommodate a three-for-one deal with the Celtics at the trade deadline.