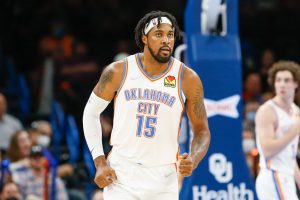 The move had been expected, with Favors telling reporters after Oklahoma City’s season ended last month that he planned to opt in. The $10.18MM option will pay him more next season than he could realistically expect to earn if he turned it down and sought a new contract as a free agent.

Favors, who was traded from Utah to Oklahoma City last July, didn’t play a ton for his new team in 2021/22, averaging a modest 16.7 minutes per game in 39 appearances. His season came to an early end due to a back issue.

When he did play, Favors averaged 5.3 PPG and 4.7 RPG. Although he’s still a solid rebounder and can score around the basket, the 30-year-old didn’t have much of a role on a rebuilding Thunder team that was more focused on developing its young players.

Now that he’s on an expiring contract and presumably isn’t in OKC’s long-term plans, Favors should be viewed as a trade candidate this offseason. However, it doesn’t sound like he’d be opposed to returning to the Thunder.

Favors recently said that playing with the young club brought back the “joy of playing basketball and not worrying about the business part,” and told the media during his exit interview that he expected to be back with the Thunder next season.