Zion Williamson No Longer Has Restrictions From Foot Injury

Pelicans forward Zion Williamson, who missed the entire 2021/22 season while rehabbing a broken fifth metatarsal in his right foot, has been cleared to play with no restrictions, the team announced in a press release. 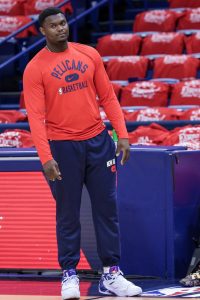 Recent imaging of Williamson’s foot revealed “continued improvement,” the team said. The update is notable because the 21-year-old experienced multiple setbacks early in the season while attempting to return to action.

As a former first-round pick entering his fourth season, Williamson is eligible for a five-year, $186MM rookie scale extension this summer, tweets ESPN’s Bobby Marks. Williamson expressed enthusiasm about the possibility of signing the extension at his end-of-season press conference last month.

It will be fascinating to see how New Orleans approaches the discussions with Williamson, as executive vice president of basketball operations David Griffin admitted that the negotiations could prove to be “challenging.” The five-year, $186MM figure represents the maximum contract Williamson is eligible for, but it’s very possible the team could push for injury-related protection, with perhaps some of the money tied to games played, similar to the rookie extension Joel Embiid signed back in 2017.