The Grizzlies made the play-in tournament in 2020 and then earned the West’s No. 8 seed in 2021, making it clear they were a team on the rise. Still, not many of us expected that rise to accelerate as quickly as it did in 2021/22, when Memphis won 56 games, the second-most in the NBA.

While Ja Morant‘s ascent to an All-NBA level played a significant part in the Grizzlies’ own ascent up the standings – and earned him a Most Improved Player award – Taylor Jenkins‘ team exhibited an impressive ability to win even without its star point guard in the lineup. Memphis went 20-5 in games Morant missed, finding a way to get positive contributions from players far down on the depth chart.

The growth of a young squad like the Grizzlies isn’t always linear, so we shouldn’t pencil the team in for 60-plus wins in 2022/23. But with Morant and Jaren Jackson Jr. around for the long haul and several solid supporting players around them, Memphis has a solid foundation to build on and, barring disaster, shouldn’t backslide into lottery territory anytime soon. 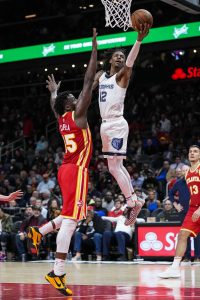 I referred above to Morant as “around for the long haul,” but he and the Grizzlies still need to make that official. That should be one of the first – and most straightforward – orders of business for the team this offseason. Morant will become eligible on July 1 for a maximum-salary rookie scale extension, and I expect Memphis to immediately put that offer on the table.

The Grizzlies’ offer will likely include Rose Rule language that allows Morant to earn a starting salary of up to 30% of the 2023/24 salary cap (instead of 25%) if he meets certain performance criteria. Even though he earned an All-NBA spot this year, Morant would have to make an All-NBA team again next season to qualify for the higher max — the Rose Rule criteria require a player to make All-NBA in either the season before his new contract goes into effect or in two of the three prior seasons.

About a week before they complete an extension with Morant, the Grizzlies will have some decisions to make on draft night. Namely, do they want to use their two first-round selections to add more young players to their current core, or is it time to start cashing in some of their draft picks for veteran help?

Memphis holds the 22nd and 29th overall picks this year and narrowly missed out on adding a third first-rounder in the lottery. The Grizzlies are perhaps the only one of 29 rivals disappointed by just how badly the Lakers struggled this season, since they would’ve acquired L.A.’s first-round pick if it had ended up outside of the top 10. The Lakers finished so far down the standings that their pick landed at No. 8 and went to New Orleans instead, denying the Grizzlies an opportunity to truly load up on 2022 draft assets. Instead of the Lakers’ first-rounder, they received a pair of second-rounders, including this year’s No. 47 pick.

Without that extra first-rounder, the Grizzlies won’t have as many options to take a truly big swing — neither the No. 22 nor No. 29 pick will bring back an impact player on its own, though perhaps the team will explore attaching one or both selections to a player like Steven Adams or Dillon Brooks in search of an upgrade. Adams, Brooks, and Brandon Clarke are among Memphis’ rotation players who will be entering contract years and will be eligible for extensions this offseason.

Keeping one or both first-round picks isn’t a bad fall-back option. After all, this Grizzlies front office snagged Desmond Bane with the 30th overall pick of the 2020 draft. A pick that successful won’t be easy to replicate, but it’s a reminder that finding a core piece late in the first round isn’t out of the question.

The Grizzlies also face major decisions on a pair of key free agents, Tyus Jones and Kyle Anderson, and it’ll be fascinating to see how the team approaches negotiations with two of its top ball-handlers.

Few point guards take care of the ball like Jones, who has led all qualifying players in assist-to-turnover ratio for four straight seasons. He also knocked down a career-high 39.0% of his three-point attempts in 2021/22.

Memphis would presumably like to bring Jones back, but the club should be wary of trying to outbid rival suitors if he’s offered more than mid-level type money. He averaged just 17.1 MPG in his 50 games as a reserve this season and doesn’t project to be part of the team’s starting or closing lineups going forward. If the Grizzlies are willing to go up to the neighborhood of $12-15MM per year for Jones, it’s likely because they have some concerns about Morant’s durability and view Jones as a reliable insurance policy.

Anderson, meanwhile, took a step back in ’21/22 following his best season as a pro a year earlier, but he has proven during his four years in Memphis to be a reliable secondary play-maker and a versatile defender, playing minutes both on the wing and as a small-ball power forward. The Grizzlies have enough depth that they shouldn’t feel pressure to overpay Anderson, but it would be nice to have him back, especially if there’s any uncertainty about whether 2021 first-rounders Ziaire Williams and Santi Aldama are ready for increased roles.

There are a couple other factors the Grizzlies must consider as they debate whether to bring back Jones and/or Anderson. One is their salary cap situation — the team could theoretically clear upwards of $20MM in cap space by letting those two players walk, which could come in handy in free agency or on the trade market.

The other factor to consider is Memphis’ roster count. Retaining John Konchar and using both of their first-round picks would leave the Grizzlies with 14 players under contract and only one open spot on their 15-man regular season roster. Making a consolidation (ie. two-for-one) trade or moving one or both of their first-rounders could help clear that logjam if the Grizzlies want to ensure there’s room for both Jones and Anderson without waiving any players on guaranteed salaries.

We’re assuming the Grizzlies will attempt to re-sign at least one of Anderson and Jones and will operate as an over-the-cap team, but they don’t necessarily have to go in that direction.

Memphis could open up nearly $20MM in cap space simply by letting their free agents walk, and could push that number even higher by trading one or both of their first-round picks or some guaranteed salary.