Mike Muscala To Return To Thunder

Veteran center Mike Muscala will return to the Thunder on a one-year veteran’s minimum contract, according to Darren Wolfson of 5 Eyewitness News (via Twitter). 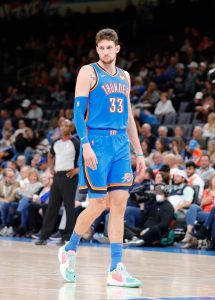 The club declined its $3.5MM team option on Muscala prior to the start of free agency. The veteran’s minimum for a player with nine years of NBA service is projected to be $2,641,682.

Initially drafted by the Hawks with the No. 44 pick in 2013 out of Bucknell, Muscala eventually evolved into a modern floor-spacing power forward/center. He split the 2018/19 season between the Sixers and Lakers. Muscala first signed with the Thunder in 2019.

The longtime vet, who turns 31 tomorrow, has spent his last three seasons with Oklahoma City. In 43 games last year for a rebuilding Thunder club, Muscala averaged 8.0 PPG and 3.0 RPG during 13.8 MPG. On offense, the 6’10” big man has carved out a niche as a bench shooting threat, boasting a career three-point conversion rate of 37.7% on 2.5 tries a game. Last season, he connected on 42.9% of his 3.8 looks a night.

Oklahoma City enjoyed one of the most active drafts among any NBA team this year, selecting Gonzaga power forward/center Chet Holmgren, NZ Breakers wing Ousmane Dieng, and Santa Clara guard Jalen Williams in the lottery. Ever the completist, team president Sam Presti also grabbed Arkansas power forward Jaylin Williams with the No. 34 pick in the second round. They join a team loaded with other exciting young players in Dort, Shai Gilgeous-Alexander, Josh Giddey, Tre Mann, and Darius Bazley.

4 thoughts on “Mike Muscala To Return To Thunder”