Pistons point guard Cory Joseph will pick up his player option for 2022/23, league sources tell Chris Haynes of Yahoo Sports (Twitter link). The decision will lock in Joseph’s $5,155,500 salary for next season. 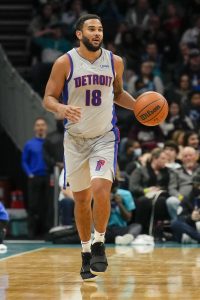 While it’s possible Joseph could have matched his option salary or gotten a multiyear deal as a free agent, the fact that he opted for the guaranteed money suggests that his market may not have been especially hot.

Given Joseph’s solid production in a rotation role in 2021/22, Detroit could simply bring the 30-year-old back for next season. However, he doesn’t really fit the young team’s timeline, and the Pistons have been linked to free agents such as Jalen Brunson and Dennis Schröder in recent weeks, which suggests they may not envision as significant a role for Joseph going forward.

As such, it wouldn’t be surprise if Joseph emerges as a trade candidate once he officially opts in — playoff teams in need of a reliable backup point guard would likely have interest.

Joseph had been the No. 41 player on our list of this year’s top 50 free agents. Since he’s opting in, he’ll be removed from that list, but he remains a part of our free agent prediction contest. If you’re entering that contest, be sure to list Joseph’s destination as Detroit to earn a free point, even if he’s traded later in the offseason.

All of this year’s player option decisions can be found right here.