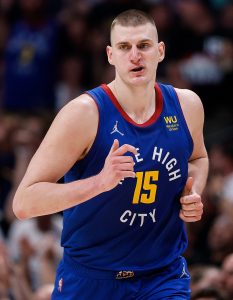 JUNE 30: The Nuggets and two-time MVP Nikola Jokic have agreed to terms on a five-year, super-max extension that projects to be the richest contract in NBA history, sources tell Shams Charania of The Athletic (Twitter link).

Jokic has one year remaining on his current contract, so his new deal will begin in 2023/24 and will be worth 35% of that year’s cap, with subsequent 8% raises.

The contract will include a player option in the fifth year, per Charania. Jokic’s salary for that season (2027/28) projects to be worth $61.45MM. The deal will also include a trade kicker, tweets ESPN’s Adrian Wojnarowski.

Jokic, who met the criteria for a super-max extension a year ago when he won his first Most Valuable Player award, wasn’t technically eligible to sign such a deal until this year, when he had seven years of NBA experience under his belt.

This extension agreement had long been anticipated. Jokic’s agent Misko Raznatovic said earlier in the year that he anticipated his client would sign a super-max extension, and the center himself confirmed in April that he’d accept the offer if the Nuggets put it on the table.