JULY 7: The deal is now official, the Nuggets announced in a press release. 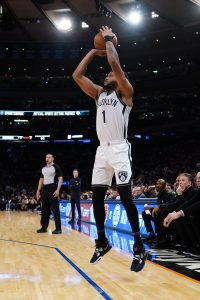 JULY 1: The Nuggets have reached an agreement to sign free agent wing Bruce Brown to a two-year, $13MM+ contract, according to Malika Andrews of ESPN (Twitter link). The deal will include a second-year player option, Andrews adds (via Twitter).

Denver appears likely to use the taxpayer portion of its mid-level exception to complete the signing — a two-year deal worth the full taxpayer MLE would come in at around $13.3MM.

Brown became eligible for unrestricted free agency this summer after accepting his $4.7MM qualifying offer from Brooklyn a year ago. He spent his first two NBA seasons in Detroit from 2018-20 and has been a Net for the last two years.

The 25-year-old is the type of player who doesn’t need the ball on offense and can switch onto virtually anyone defensively, making him an ideal fit for a Nuggets team that has been looking to upgrade its defense around stars Nikola Jokic, Jamal Murray, and Michael Porter Jr.

According to Mike Singer of The Denver Post (Twitter link), the Nuggets had Brown high on their list of targets and love his defensive versatility. As Singer notes (via Twitter), it looks like Brown will essentially take Austin Rivers‘ place on the roster, since Denver now has a projected 14 players under contract for 2022/23, plus restricted free agent Vlatko Cancar.